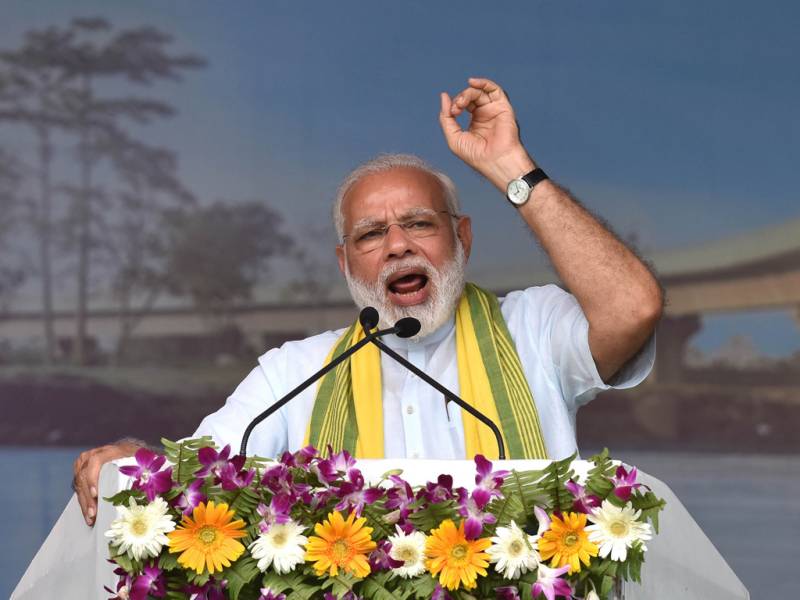 KOLKATA: Prime Minister Narendra Modi staged a massive rally in India’s east, stepping up the battle with a local rival who could frustrate his party’s return to power.

Modi addressed tens of thousands of supporters in Kolkata, the capital of West Bengal, as its leader Mamata Banerjee, a powerful Modi enemy, campaigned against the prime minister elsewhere in the state.

Voting in India’s massive election — the biggest in history, with 900 million eligible voters — begins in a week and West Bengal is a key battleground for Modi and his Bharatiya Janata Party (BJP).

The ruling party has campaigned hard against Banerjee, fearing she could lead a possible alliance of India’s disparate regional parties against the BJP and dent its re-election prospects.

“I haven’t seen a massive turnout like this before in West Bengal. I bow to your love and affection,” Modi told a sea of supporters in Kolkata.

“Your vote will help us reach new heights of development in 2019. The BJP will overthrow (Banerjee’s) misrule in the state.”

The fiery West Bengal leader took on the prime minister at a counter-rally, declaring: “I am not Modi. I don’t tell lies.”

Her profile has grown considerably since her party took most of the state’s 42 parliamentary seats in 2014, and she remains hugely popular especially among poorer voters.

West Bengal sends the third-highest number of lawmakers to the Lok Sabha, the country’s lower house of parliament, and the BJP is desperate to make inroads in the key state of 90 million.

Analysts say the BJP could be targeting West Bengal for seats to offset potential losses in other important states.

The BJP fears Banerjee could cobble together an alliance against them, as smaller parties did in Uttar Pradesh, a bellwether state often considered India’s most important to win.

If the BJP and Congress, the main opposition party challenging Modi, fail to get a decisive share of the 545 parliamentary seats, Banerjee could also become one of the top contenders for the prime minister’s job.

The Hindu nationalist party has attacked her record on law and order following a spate of election-related violence last year, and promised to crack down on Muslim immigrants in the state.

Migrants have long been accused of grabbing land in West Bengal and stoking tensions with locals.

India’s general elections will run from April 11 to May 19 in the largest democratic exercise of its kind ever held.