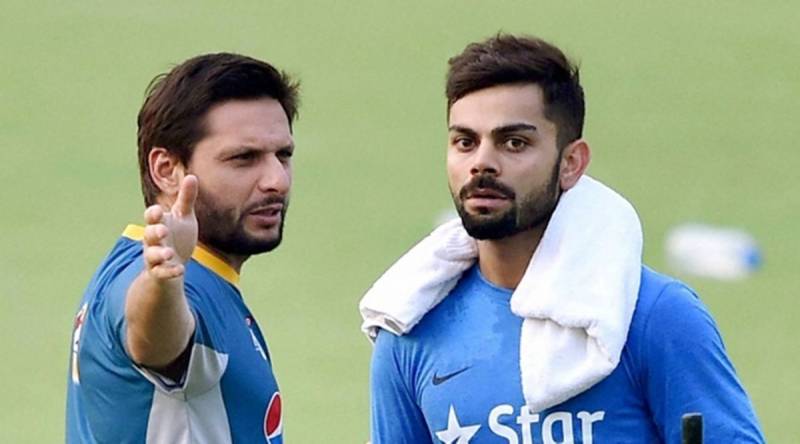 NEW DELHI - Indian skipper Virat Kohli has expressed his view on the spat between Shahid Afridi and Gautam Gambhir and said that even though he does not have complete knowledge, his priority stays with his nation.

Talking to media on Wednesday, Kohli said, “As an Indian you want to express what is best for your nation & my interests are always for the benefit of our nation. If anything opposes it, I would never support it for sure.”

“But having said that, it’s a very personal choice for someone to comment about certain issues. Unless I have total knowledge of the issues and the intricacies of it I don’t engage in it but definitely, your priority stays with your nation.”

Reacting to Monday’s anti-terror operation in Kashmir where 13 Kashmiris were killed, Afridi had tweeted, “Appalling and worrisome situation ongoing in the Indian Occupied Kashmir. Innocents being shot down by oppressive regime to clamp voice of self determination & independence. Wonder where is the @UN & other int bodies & why aren’t they making efforts to stop this bloodshed?”.

Incidentally, in the past, Afridi had spoken about people from Kashmir while captaining Pakistan in World T20.

Gambhir had earlier lashed out at Afridi saying, “Afridi is only looking for UN which in his retarded dictionary means “UNDER NINTEEN” his age bracket.”