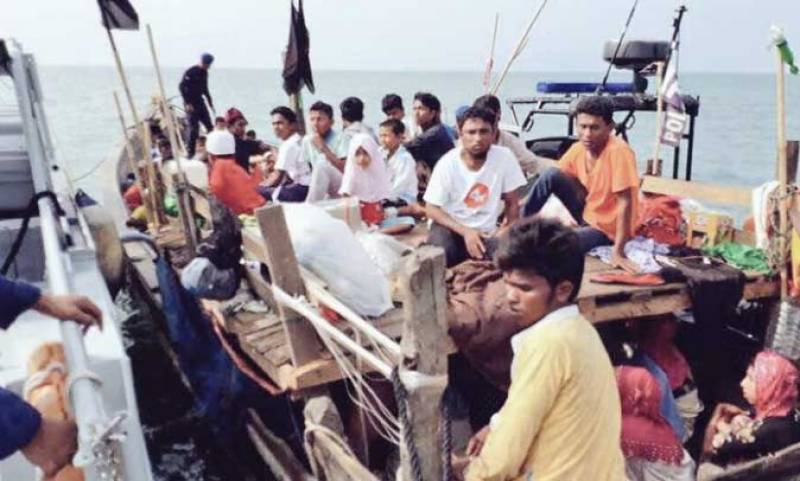 Malaysian authorities on Tuesday intercepted a boat carrying 56 people believed to be Muslim Rohingya refugees who fled from Myanmar, and brought the vessel and its passengers to shore.

The navy chief, Adm. Ahmad Kamarulzaman Ahmad Badaruddin, said the boat was intercepted after it entered Malaysian waters and was moored off the northern resort island of Langkawi.

The boat had stopped temporarily Sunday in southern Thailand, where it underwent repairs and was resupplied with fuel and food before being sent on its way to Malaysia, as its passengers reportedly desired.

About 700,000 Rohingya have fled western Myanmar’s Rakhine state to neighboring Bangladesh in the past seven months to escape a brutal counterinsurgency campaign by Myanmar’s army. Rohingya, treated as undesirables in predominantly Buddhist Myanmar, used to flee by sea by the thousands each year until security in Myanmar was tightened after an upsurge of refugees in 2015 caused regional concern.

The navy chief said that all of the boat’s passengers were safe but tired and hungry, and were given food and water. The boat and its passengers will be handed over to immigration authorities, he said.

Zulkifili said the refugees would be handed over to immigration authorities for humanitarian reasons, an indirect indication that they will be allowed to stay rather than sent back to sea. The issue of whether to allow them to stay is a sensitive one, because of fears it might encourage a new wave of boat people.

However, an expert on the plight of the Rohingya said the appearance this week of the boat — the first known case this year — does not portend a new exodus by sea.

Chris Lewa of the Arakan Project, an independent research and advocacy group, said that the safe time for such journeys is about to pass, as the annual monsoon season normally starts in April. Tight security by Myanmar officials also makes departures difficult, though it would not be surprising if a handful of more boats were seen in the near future, she said.

Thailand has an official policy of pushing back boat people from its shores, so most Rohingya prefer to head to Malaysia, whose dominant Malay Muslim population makes it a more sympathetic destination. There have also been many cases of Rohingya landing in Thailand being taken by human traffickers and forced into near-slavery, held for ransom or otherwise abused.

Ahmad Tarmizi Sulaiman, the vice president of the Malaysian Consultative Council for Islamic Organization, said the group received a call Tuesday from the coast guard to provide assistance to the refugees.

He said his organization was asked to help due to its record of providing medical treatment and basic necessities such as food and clothing to previous Rohingya refugees. APP/AFP