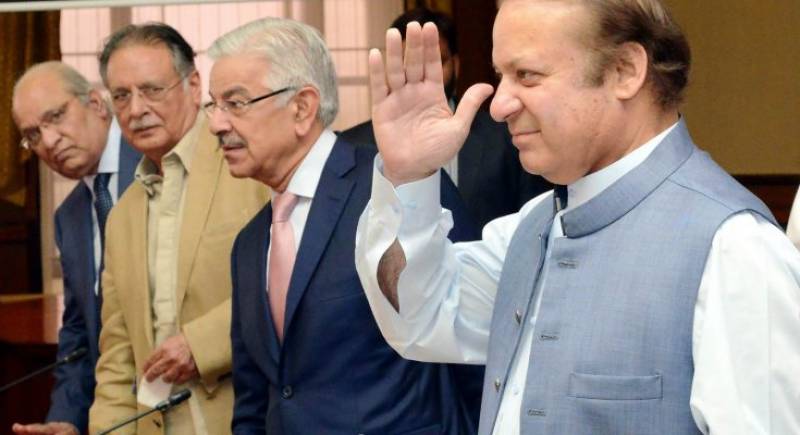 ISLAMABAD (APP): Leaders of all political parties on Monday extended full support to the government on Kashmir issue, condemned the unabated atrocities on people in the Occupied Kashmir and the belligerent attitude of Indian government.

The leaders, representing different parties across the political spectrum, voiced their support to the inalienable right of self-determination for the Kashmiris and said there was no military solution to the problem.

They called for a solution by implementating of United Nations Security Council Resolutions in accordance with the aspirations of the people of Kashmir.

The meeting, held here at Prime Minister Office and chaired by Prime Minister Muhammad Nawaz Sharif, vowed to evolve a joint response on Kashmir issue and the situation on Line of Control (LoC).

Chairperson Pakistan People's Party Bilawal Bhutto Zardari in his remarks said despite differences on multiple issues, his party stands with the government on the Kashmir issue and Indian aggression on the Line of Control, a statement from the PM House quoted him as saying.

He termed it a "turning point" in Indo-Pakistan relations and said only a united Pakistan can counter Indian aggression.

He said his party would work along with the government to achieve national security objectives. There was no military solution to the Kashmir dispute, he added.

Bilawal also assured the Prime Minister of his full support on the issue and said he was willing to work with him in a "harmonious manner."

Shah Mehmood Qureshi said the Pakistan Tehreek-e-Insaaf, after setting aside all differences with the government, has participated in the conference with a clear message to the world and India that "we all stand united in solidarity with the people of Kashmir," according to the statement from the PM Office.

"Prime Minister, your speech at the United Nations General Assembly, was very comprehensive and praiseworthy," the statement said.

He mentioned the very positive steps taken by the PML-N government immediately after coming into power for improvement of ties with India, however he regretted that these were not reciprocated by the Indian government.

Qureshi said it was India which violated all bilateral agreements with Pakistan in the past. "Today the unarmed and oppressed people of Kashmir have risen against the Indian atrocities. India fully knows there was no military solution to the Kashmir dispute, but was still continuing with aggression."

He dispelled the impression that Pakistan was isolated at the diplomatic front and said in fact, it was India that boycotted the SAARC Summit, aimed at regional harmony and peace.

"Prime Minister, I have full faith in your political acumen and patriotism," Qureshi said according to the statement.

Speaking on the Indus Waters Treaty, Shah Mahmood Qureshi said it was not even affected during the Kargil episode, and mentioned the irresponsible attitude of the Indian government on the issue.

He said keeping in view the current situation, his party, in national interests, would extend full support the government.

Ameer-e-Jamat Islami, Siraj ul Haq extended congratulations to the Prime Minister on holding the meeting at this critical juncture.

He said that PM's UNGA speech was highly reflective of thesentiments of the people of Pakistan.

Pakistan will not step back on Kashmir cause: Sartaj Aziz

"We are with the government, valiant armed forces and the people of Pakistan. We want that in the national interest, a unified message for Pakistan and Kashmir should be formulated," he said according to the statement from the PM Office.

Maulana Fazlur Rehman of JUI-F in his remarks stressed the need for forging national unity at this critical moment and said a collective voice and resolve of the entire nation was the need of the hour. He called for highlighting brutal state oppression in IOK, both at the political and diplomatic level.

He said today's meeting has sent a very positive and constructive message the world over.

"Our stance on Kashmir reflects the sentiments of the nation and the people of Indian Occupied Kashmir, and it is a very principled stance," he added.

"Our political and diplomatic force needs to build upon the momentum generated by the recent Kashmiri uprising," he said.

He said the decision of the Prime Minister for Joint Session of the Parliament was highly commendable and added it has been taken at an appropriate time.