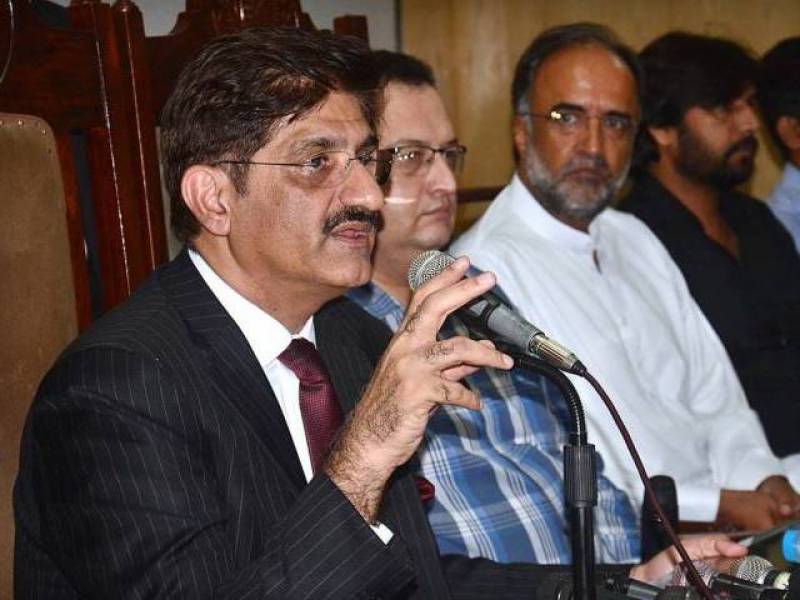 KARACHI: (APP) Sindh Chief Minister Syed Murad Ali Shah has said that his government was striving hard to implement the National Action Plan in true letter and spirit in Sindh.

This is the only way to purge the provice of terrorism, extortion, kidnapping for ransom and target killing, he said.

This he said while presiding over a meeting at new Sindh Secretariat to review the implementation of Apex Committee decisions, said a statement on Monday.

The IG Sindh briefing the CM Sindh said that under NAP 2278 cases of violation of Loud Speaker Act have been registered against which 1584 have been arrested.

Talking about Illegal Afghanis living in Sindh, the IG Police said that 1521 cases have been registered, of them 1197 challaned in the courts where 198 cases have been decided. Out of 2768 arrested Afghan nationals, 1293 are in jails.

He said that spread of hate material is another point of concern of NAP. So far the police have registered 119 cases, 76 challaned and 16 cases have been decided by the courts. Presently, 26 accused are in jail, 13 are on bail while 23 have been acquitted.

Giving details of combing operation, the IG said that over all 3069 operations, including 1989 in Karachi 325 in Sukkur, 610 in Larkana have been conducted so far and arrested 4513 accused.

Giving presentation on action taken against militias and sub nationalists, A.D. Khwaja said that 75 cases have been registered and all of them were challaned in the courts which have decided five cases. The police had arrrested 86 accused, of them 56 are in jail, 13 are on bail.

The IG Sindh talking about religious terrorism said that 165 cases, including 157 in Karachi have been registered against which 195 accused were arrested.

The police have presented the challan of 120 cases and the courts have decided only six. Presently, 169 terrorists are in jail, 11 are on bail and 15 acquitted. he said that 116 terrorists of different banned religious outfits were killed in encounters.

In the sectarian terrorism, the IG Sindh said that 159 cases, including 155 in Karachi were registered against which 131 were rounded up.

The 114 cases have been challaned in the courts, of them four have been decided so far. 197 accused are in jail, 19 on bail and 15 acquitted. Some 21 sectarian terrorists were killed in encounters.

He said that the police have registered seven cases of terror financing, of them six were challaned in the courts. The police arrested 11 accused and all of them are in jails.

He said that the police under the National Action Plan has also taken action against wall chalking against which 546 cases, including 471 in Karachi, 64 in Sukkur and 11 in Larkana have been registered.

Out of 546 cases 47 have been challaned in the courts and three have been decided. He said that against wall chalking 78 accused were arrested, of them 22 are in jails, 50 on bail.

The CM Sindh said that he would taken up the issues of madaris registration in NAP meeting. There should a national consensus on this issue. He was apprised that 2309 madaris have been closed.

Sindh Chief Minister Syed Murad Ali Shah expressed his satisfaction on the progress on the NAP in Sindh and said there was much needed on prosecution side.

The government was working to enhance the capacity of Sindh police by imparting them latest training and equipping them with lattest gadgets and weapons.