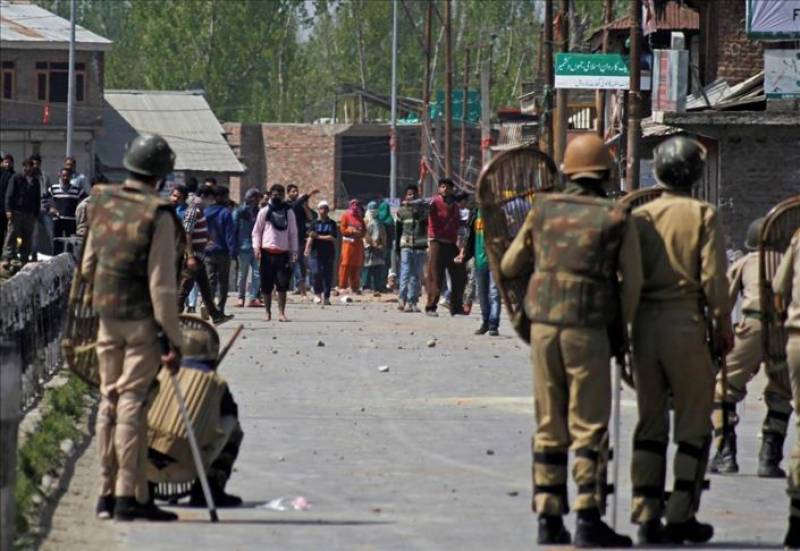 ISLAMABAD (APP): Massive clashes erupted in Mazhama area of Magam in Badgam district on Sunday, despite imposition of curfew in Narbal and Kawoosa areas to prevent a march towards Narbal as part of protest programme given by joint Hurriyet leadershipin Indian Occupied Kashmir (IOK).

According to KMS, people took to the streets in Mazhama against vandalism carried out by the Indian forces in the area.

Forces fired teargas shells on the protesters, triggering intense clashes in Sofi Mohalla of Mazhama village. Late night clashes were reported from Kanihama and Mazhama villages of the district.

Meanwhile, Indian forces used force on participants of a pro-freedom rally in Putushai area of Bandipora. The forces fired dozens of tear smoke shells and pellets into the rally. Hundreds of people, including women, were taking part in the rally.

Locals had called for Putushai Chalo where several resistance leaders were supposed to address the rally.However, forces barged into the village and resorted to indiscriminate teargas shelling and pellet firing.

On the other hand, at least 6 civilian structures and many paddy heaps were set on fire in Kaimoh, Khudwani area of Kulgam district during nocturnal raids by the Indian forces.

Forces also smashed dozens of parked vehicles in the area triggering to clashes early this morning despite the imposition of curfew in the district.

Occupation Forces arrested eight youth of the area. A truck was put on fire by the forces in the area.