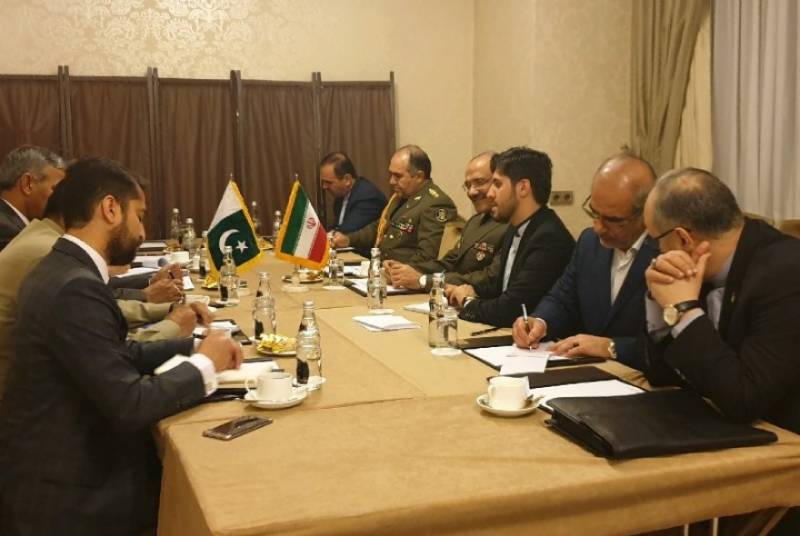 Tehran, May 1, IRNA - Deputy Minister of Defense for International Affairs Brigadier-General Mohammad Ahadi said on Wednesday that Iran and Pakistan would establish a sustainable border security.

He made the remarks in a meeting with Deputy Minister of Defense of Pakistan Major General Asif Ghafoor. Brigadier General Mohammad Ahadi said, 'Many cultural, historical and religious commonalities of the people of Iran and Pakistan, and the existence of a 900-kilometer common border between the two countries, is a great opportunity to take further steps to promote the relations between the two countries.'

The Iranian military official expressed his satisfaction with the visit of the Pakistani PM to Iran and his meetings with the Supreme Leader and the President of the Islamic Republic of Iran, underling that during this trip, excellent agreements were reached in various areas, especially on border security, and we hope that these agreements are being enforced as soon as possible in the area of promoting border security.

Deputy Minister of Defense for International Affairs referred to a delegation's visit from the National Defense University of Pakistan to Iran and made the remark that the visit of the Pakistani military delegation to Tehran was an opportunity for the professors and students of the National Defense University of Pakistan to get acquainted with the defensive achievements of the Islamic Republic of Iran and our defense policy,'.

Referring to the will of the two countries' top officials in establishing sustainable border security and emphasizing the high interests of the two nations of Iran and Pakistan, Ahadi expressed that two countries take further steps in the development of technical cooperation and studies.

The top official conveyed his the condolences on killing of a number of Pakistani military forces in the recent terrorist incident, and underlined the involvement of regional and trans-regional enemies of the two countries as the unstabilizing factor and insecurity of the borders of the two countries.

He concluded that despite this bitter and unpleasant incident Pakistani Prime Minister Imran Khan's trip to Tehran has been successful and gained valuable achievements.

Meanwhile spokesperson of the Pakistan Army says that Pakistan has increased the number of troops along joint border with Iran.

He said, “We have not only increased the number of our forces on the border, but also increased surveillance of sensitive points on the border misused by terrorists and miscreants.”

The spokesperson added Frontier Crops is a force to ensure peace and security of Balochistan province and nowadays they are also guarding border with Iran.

He said FC force is divided into two parts North and South and the southern FC is responsible for maintaining peace on joint border with Iran.

In response to another question of IRNA, Major General Asif Ghafoor said that currently there is no information available about the fate of some abducted Iranian border guards.

He said Prime Minister Imran Khan paid a historic visit to Tehran from 21-22 April 2019 on the invitation of President Hassan Rouhani.