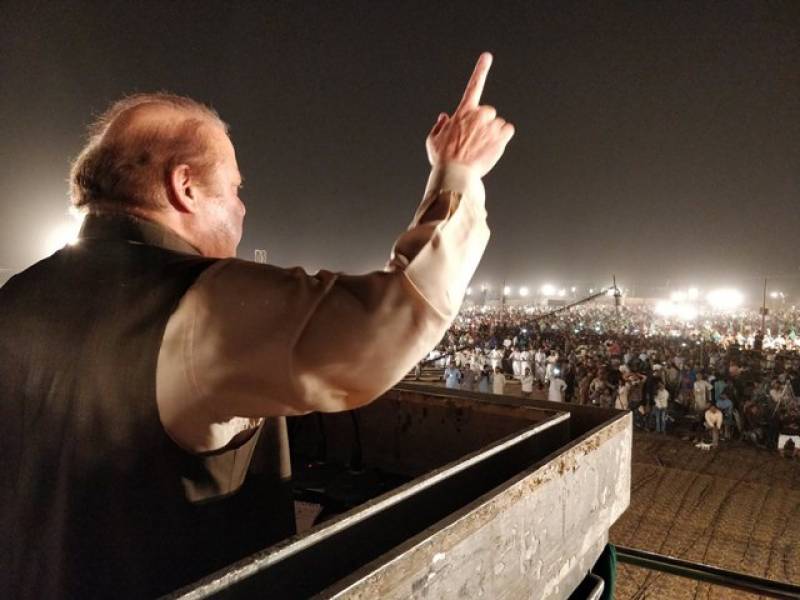 ISLAMABAD: Our party is at war with the aliens, and not with Asif Zardari or Imran Khan, said Pakistan Muslim League Nawaz chief, Mian Nawaz Sharif on Wednesday.

“PTI rally in Lahore had no match with today’s PML-N gathering. That meeting was of Lahore but participants were from Peshawar, and pursuing the agenda of someone else,” he said while addressing a rally in Sadiqabad city of Punjab.

Without naming Imran Khan, Nawaz Sharif said the ‘ladla’ (favourite) was a ‘total failure’ as he had claimed of making a new Pakistan but could not develop even Khyber Pakhtunkhwa and its capital Peshawar.

Sharif reiterated that his party ‘restored peace in Karachi and Balochistan’ and initiated the mega projects under China-Pakistan Economic Corridor.

If the PML-N is elected again, he said, Sahiwal would be connected to the network of motorways. He assured that if elected again, his party would provide shelter to the homeless.

He alleged that PTI chairman had sold his party members to PPP in the Senate election.

“Asif Zardari would not oppose Imran Khan, both had some secret understanding,” Sharif said.

He said those who had ‘embezzled billions of rupees’ from the national exchequer in the past and even exploited Haj pilgrims should be held accountable.

Earlier, Maryam Nawaz said Imran Khan played the role of a ‘guest actor’ in every election and he would disappear after the upcoming general election.

The PML-N would continue its journey of selfless public service and upholding the country’s dignity, she vowed.

“PTI leadership had called in the party workers to Lahore from across Pakistan but people of Punjab refused to listen to him. They knew that Imran is nothing more than a rubber stamp leader,” she said.

Maryam Nawaz said her father Nawaz Sharif ‘is the only leader who is Sadiq and Ameen. APP/AFP