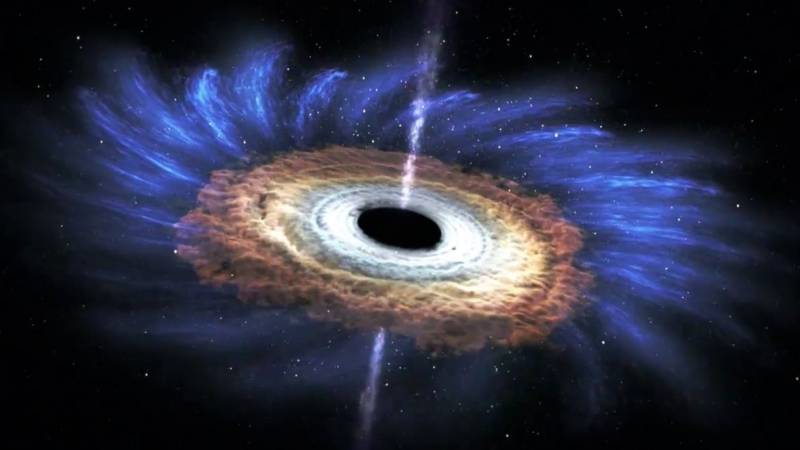 ISLAMABAD - Black holes, a region of space with a gravitational field so intense, that no matter, radiation or even light can escape it, have been center of discussion and research for astrophysicists.

The idea which was discussed for the first time in 1784 by English clergyman John Michell has fascinated both scientists and common people for decades and it has gotten more interesting, as Quran discussed the idea of the black hole, 1,400 years ago.

According to *ThereIsNoClash*, up until 2011 astrophysicists were not able to confidently report about the phenomenon of stars falling in the black hole, but now they can and three stars have fallen into the black holes until 2016.

In Quran, interestingly, there is a whole chapter called Surah An-Najm (The Star) and its first verse states: “By the star when it falls.”

In this chapter, Quran goes on to describe characteristics of a place, so similar what we know as a fitting description of the black hole.

The presenter of *ThereIsNoClash*, Clare Forestier, further discussed the Prophet Muhammad’s (PBUH) *Journey of Meraj* stating that although there were technological facilities to prove the journey at that time, if one study it closely, it will be found that this journey did actually occur.

“Because astonishingly enough, the description of the area the Prophet (PBUH) ascended to matches the characteristics of what we now know about the black hole,” the presenter said, adding in verse 16 of Chapter 53, Quran describes this place in space as very dark. In fact, it describes it as darkness covered or draped in darkness.

“And as we all know, space is dark and black holes are darkest.”

Secondly, Quran says that ordinary people cannot look at this dark area in space. The cannot see it directly as their eyes bypass or surpass the boundary of this area, and you can only see beyond it or around it.

“It’s almost this area behave as a lens. Science, as it turns out, has a term for this, which is the gravitational lens,” Forestier said.

The presenter also mentioned more similarities between the black hole and descriptions by Quran ie shape of black holes and that black holes are finite.