Tajikistan President wins hearts of Pakistanis with his remarks regarding Pakistan
3 Jun, 2021 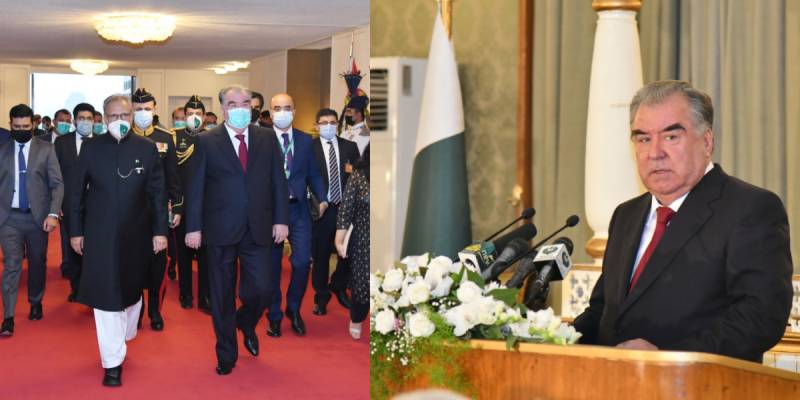 Tajik President Emomali Rahmon, who is on a two-day official visit to Pakistan, has said that his country considers Pakistan as a brotherly and reliable partner link .

While addressing the gathering at a banquet hosted by President Dr Arif Alvi in his honour at Presidency in Islamabad, the Tajik President said that his country wants to promote land linkages with Pakistan for regional development and prosperity.

“This visit will give a new impetus to relations between the two countries,” he said.

He said that agreements signed with Pakistan will take the relationship to new heights. Also, he invited Dr Arif Alvi to visit Tajikistan.

On the other hand, addressing the event, President Dr. Arif Alvi said the relationship between both countries is getting better and stronger day by day.

“Pakistan will provide access to Central Asian states to trade with the world through its ports,” Ali added.

The President said bilateral relations in the areas of trade, investment and people to people contact will be further enhanced.

During his address, Prime Minister Imran Khan underlined the need for peace in Afghanistan for trade between Pakistan and Tajikistan.

He said, “Chaos in Afghanistan will ultimately increase the menace of terrorism.”

“Trade between both the countries will become easier through Gwadar,” the premier said adding, “Peace in Afghanistan imperative for the Pak-Tajik trade.”

Whereas, while expressing his views, the Tajik President thanked Prime Minister Khan for extending an invitation to visit Islamabad.

He said MoUs have been signed between both the countries and vowed to further solidify bilateral ties between the two countries.

The visiting dignitary also embraced Pakistan’s efforts for enduring peace and stability in the region.