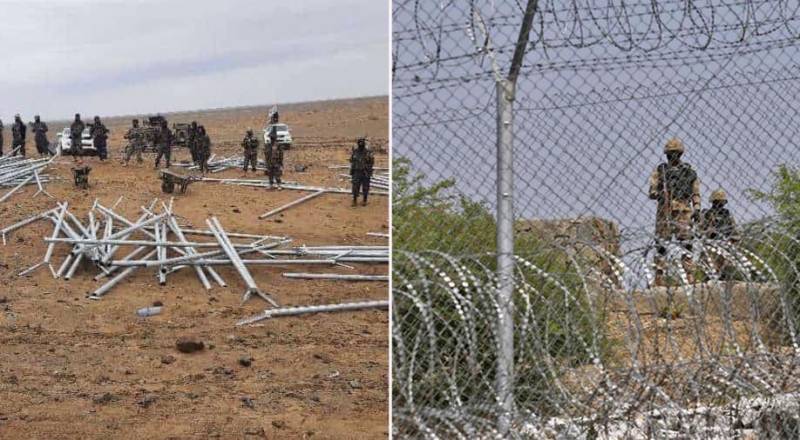 ISLAMABAD – Pakistani officials conveyed Islamabad’s concern to the highest level to the interim Afghan Taliban government as the soldiers again disrupted the fence constructed on the Durand Line.

Reports in local media said the Afghan Taliban leadership was conveyed a strong message that Pakistan was observing maximum restraint to evade any escalation in wake of recent developments at the international land border.

In the latest viral clips, Taliban soldiers can be seen thrashing the fencing erected by Pakistan security forces near southern Afghanistan using a cargo truck.

In light of recent developments, Pakistan is also expected to issue a formal statement on the issue in the coming days as there have been repeated incidents where Taliban soldiers tried to remove the fence.

Around 90 percent of the Pak-Afghan border is now stands fenced as the fencing is part of the border mechanism to regulate the movement of people but also to thwart terrorism-related activities.

Some reports also claimed that it’s the local Taliban commanders who were provoking border forces on their own.

Earlier, Taliban's spokesperson Zabiullah Mujahid said Afghans opposed the fence erected by Pakistan along the Durand Line. He said Afghan authorities will announce their position on this issue. We want to create a secure and peaceful environment on the border so there is no need to create barriers, he opined.

The recent developments surfaced a week after the Afghan Taliban have launched an investigation after their soldiers apparently disrupted the Pakistani military's work of fencing the border. Taliban spokesman Bilal Karimi said they were investigating the incident.

Afghan defense ministry spokesman Enayatullah Khwarazmi confirmed to international media that Taliban soldiers stopped the Pakistani military from building the security fence along with the eastern province of Nangarhar on Sunday.

The recent developments under the interim Taliban government have recalled the events as the contentious issue provoked border clashes in the past causing casualties.