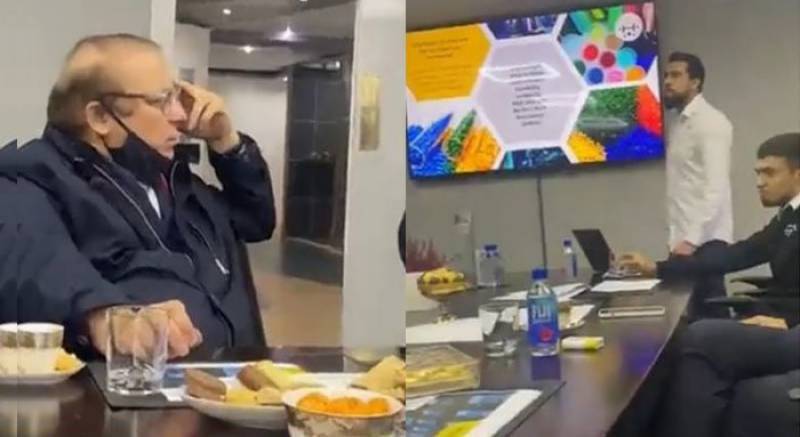 LONDON – A clip of former Prime Minister Nawaz Sharif has surfaced online in which he can be seen visiting a factory in Lancashire, United Kingdom.

The deposed Pakistani premier has been in Britain since 2019 for medical treatment. Sharif’s clip went viral a day after his fresh medical report was submitted to the Pakistani Court in which the PML-N supremo was advised against travelling to Pakistan in wake of possible health risks.

In the clip, the senior Pakistani politician can be seen visiting different sections of the industrial unit and getting a briefing from the staff.

Sharif's son and former finance minister Ishaq Dar, who was declared an absconder by an accountability court, was also spotted taking a briefing.

Reports in local media suggest that the industrial unit is located in Nelson – around 400 kilometres away from Sharif’s Avenfield residence.

As the clip went viral, the Sharif family issued a clarification saying Nawaz Sharif visited the factory at the invitation of his friend and had lunch.

Meanwhile, the recent medical report of Sharif has been submitted to the Lahore High Court (LHC), in which his physicians advised him against travelling to the homeland.

Sharif is likely to stay in the British capital until his angiography is performed as travel could worsen his condition.

The report suggests that former Pakistani PM is under severe stress after the death of his wife Kulsoom Nawaz and he was advised to continue activities without any mental stress.