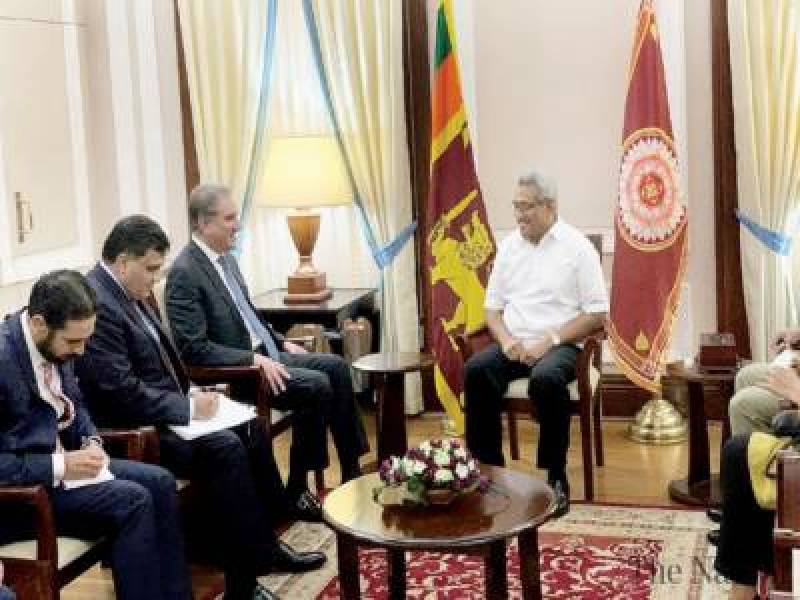 The FO spokesperson said Qureshi told the Sri Lankan foreign minister that the 120-day plus lockdown remains a “cause of serious concern” for the international community. During the meeting the two ministers discussed trade, investment, tourism and people to people contacts. The spokesperson said: “Both countries [are] very keen to further deepen and strengthen the entire gamut of bilateral relations.”

Foreign Minister Qureshi is on a two-day official visit to Sri Lanka and is the first Pakistani official to visit the country after its elections.

The minister invited Gunawardena to visit Pakistan with a delegation from the Sri Lankan business community to boost bilateral trade and investment between the two countries.

In a tweet Faisal said Qureshi and the Sri Lankan President discussed bilateral issues, trade, investment and people to people contacts. The FO spokesperson said: “FM handed over a letter from President to President of Sri Lanka and invited him to visit Pakistan at his earliest convenience.”

The spokesperson said: “Both countries [are] very keen to further deepen and strengthen the entire gamut of bilateral relations.”

Speaking to the media after the meeting, Qureshi termed his meeting with the Sri Lankan foreign minister as “excellent” and extended an invitation to Gunawardena to visit Islamabad.

“During the presidency of Mahinda Rajapaksa, the ties between our countries were at a high level. Both our countries have always enjoyed excellent relations, and we have always helped each other,” he told reporters soon after his arrival, referring to the elder Rajapaksa brother.

In a meeting, the top diplomat discussed with the president matters related to bilateral relations and regional issues, a statement from Pakistan’s Foreign Ministry said.