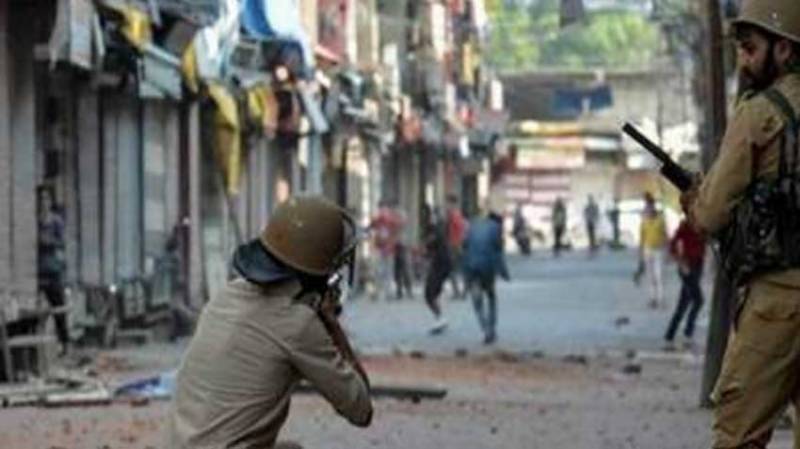 In occupied Kashmir, Indian troops in their unabated acts of state terrorism martyred 34 Kashmiris including 3 in custody during the last month of May.

According to the data issued by the Research Section of Kashmir Media Service, today, the killings rendered 4 women widowed and 10 children orphaned.

During the month, 601 people were critically injured due to the firing of pellets, bullets and teargas shells by Indian army, paramilitary and police personnel on peaceful demonstrators in the occupied territory while 156 civilians including a woman were arrested. Most of the arrested persons were Hurriyat leaders, activists and youth. Seven of the arrestees were booked under black law Public Safety Act.

The troops molested at least 5 women and damaged and ransacked 39 houses during the period.

Meanwhile, in a statement in Srinagar, senior APHC leader and Chairman of Tehreek-e-Hurriyat, Muhammad Ashraf Sehrai said unresolved Kashmir dispute is main cause of sufferings of people of occupied Kashmir.

Dukhtaran-e-Millat has condemned the prolonged illegal detention of its Chairperson, Aasiya Andrabi, and her associates, Naheeda Nasreen and Fehmeeda Sofi, in Tihar Jail.

On the other hand, addressing a gathering at Thanamandi in Rajouri district of Jammu region, Chairman Jammu and Kashmir Peoples Movement, Mir Shahid Saleem said settlement of disputes of Kashmir and Palestine are imperative for peace and stability in the world.

He deplored that international community had adopted a criminal silence as the people of Kashmir and Palestine continued to suffer at the hands of forces of oppression and suppression.

In a statement in Srinagar, Islami Tanzeem-e-Azadi said that occupation authorities are prolonging illegal detention of party Chairman, Abdul Samad Inqilabi, by not producing him before the court on the dates of hearing of cases registered against him.

In a statement in Srinagar, Jammu and Kashmir Muslim League General Secretary, Muhammad Rafiq Ganai paid rich tributes to the three Kashmiri youth who were martyred by Indian troops in Shopian, yesterday.