NEW YORK: A crowd of Muslims kneeled to pray before breaking their Ramazan fast outside the Trump Tower in a protest against what they say is the US president´s Islamophobic rhetoric.

About 100 Muslims showed up for the Iftar event late Thursday, organized by immigrant defense groups. A similar number of non-Muslim supporters also attended.

Participants sat on the edge of the avenue after prayers and shared a meal that included rice, chicken and pizza.

Police monitored the group closely, as they do with all groups near the building.

Trump Tower in Manhattan is home to the Trump Organization, the heart of President Donald Trump´s business empire. First Lady Melania Trump lives there with the couple´s youngest son, Baron.

Fatoumata Waggeh, a 26 year-old Muslim-American woman with Gambian roots, said she had come to denounce the negative "rhetoric they are spreading around Muslims," and to show solidarity.

Maggie Glass, a 31 year-old New Yorker active with a Jewish refugee association, said she was there "to support all our Muslim neighbors and friends. 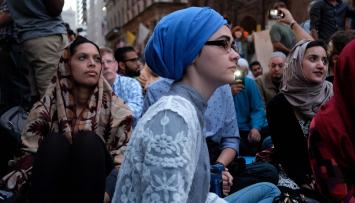 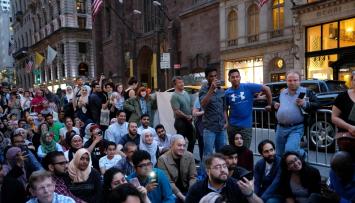 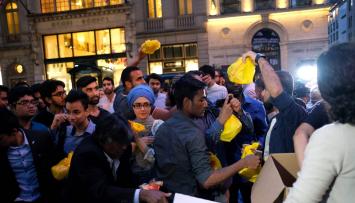 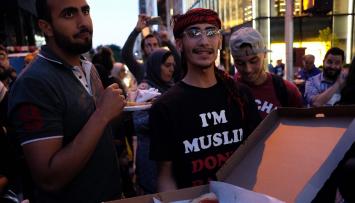 "I just thought it was an opportunity for us to come together as a community, to show that we are united."

Event organizer Linda Sarsour told AFP she was satisfied with the turnout.

She didn´t mind that unlike previous US presidents, Trump had not invited Muslims to the White House to mark Iftar.

"To be honest with you, even if they did, I would ask Muslims not to endorse an administration that is acting so divisively," she said.

"So they are not inviting us, but we don´t want to go anyway."

During their protest, a small group of Trump supporters on the other side of the street chanted "USA, USA!" and "We don´t want sharia law!"