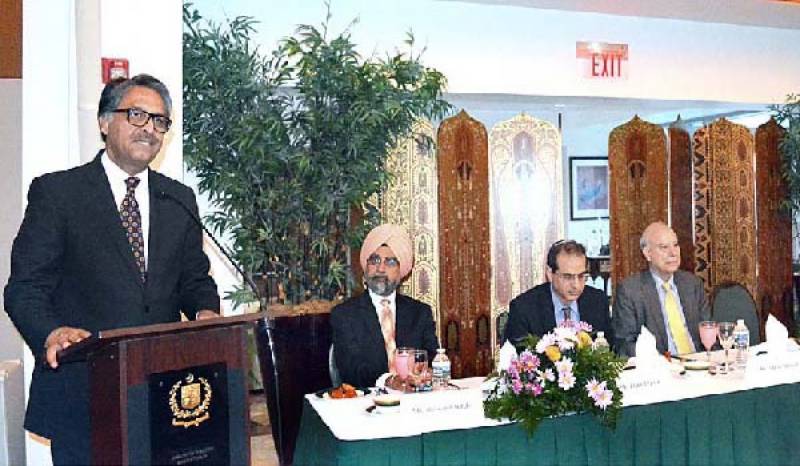 WASHINGTON: (APP) Pakistan is playing a leading role in the United Nations to build consensus on religious tolerance, Pakistan's ambassador to the United States, Jalil Abbas Jilani said at an inter-faith gathering, and called for a universal acceptance of the human rights to address religious intolerance.

Speaking at an inter-faith Iftar dinner arranged at the Pakistan Embassy on Thursday night, Ambassador Jilani said that in a globalized world there is a need to promote religious and national identities based on common and cherished values of peace and amity.

"Inter-faith harmony is an important component of the approach that needs to be implemented in letter and spirit," the ambassador told the gathering attended by the representatives of Muslim, Christian, Jewish, Hindu, Budhist and Sikh religion.

The ambassador said that Islam is a religion of peace and harmony and there is no place for aggression, cruelty or injustice in the teachings of Islam. He, however, regretted that religion is sometime some time used as a pretext to promote bigotry.

"This has fueled the menace of terrorism."

He said this has emerged as the single largest threat to temporary existence and the international community needs to battle this battle of ideas in concert.

The ambassador said that in today's interconnected world technology and social media, there is a tendency to portray a negative image of religion leading to intolerance.

"Politically motivated fear mongering is a divisive practice resulting in hate and violence," he warned.

The ambassador said that Pakistan has been actively involved in international effort to curb terrorism and extremism. "We have made countless sacrifices to eliminate this phenomenon. As the worst victim of terrorism, our demonstrated commitment to fighting this plague is second to none."

On the diplomatic front, he said, Pakistan as the chair of the OIC Group at the Human Rights Commission in Geneva has been playing the lead role in building consensus on religious tolerance.

Ambassador Jilani said that founding fathers of Pakistan and the United States envisioned principles of inter-faith harmony and co-existence for our respective societies. He recalled that at the funeral of legendary boxer Muhammad Ali, people of all faith, races and ethnicities gathered to pay homage to this great sportsman.

"Today, more than ever before, we need religion and its common spiritual underpinnings as a unifying force of good," the ambassador said and called for inter-faith gathering to reiterate the resolve to reject hatred, terrorism and extremism.

Representatives of all faith appreciated this effort of Pakistan embassy. All leaders of faith prayed in their languages for world peace and to adhere on commonalities present in their religions to create harmony, love and peace in the world.