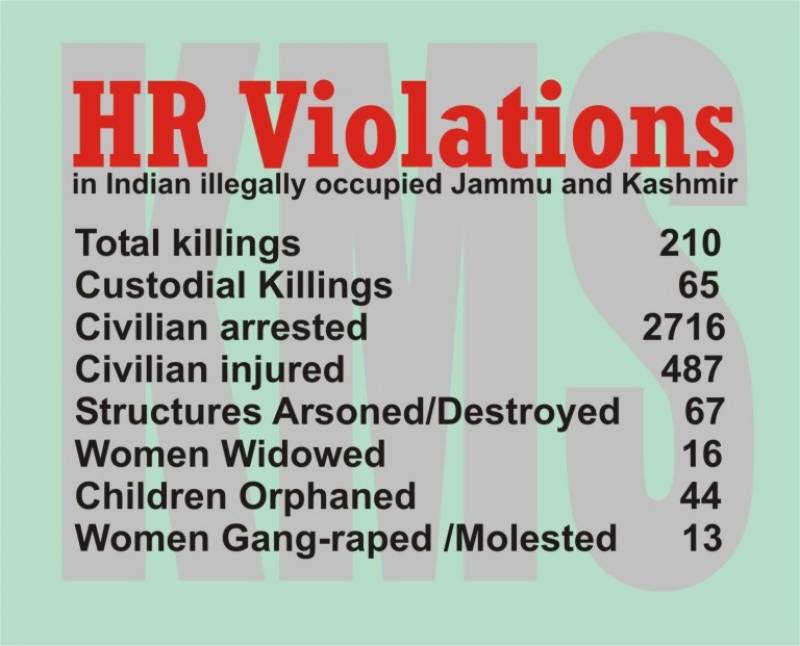 In Indian illegally occupied Jammu and Kashmir, Indian troops in their unabated acts of state terrorism martyred 210 innocent Kashmiris including five women during the year 2021.

According to a report released by Kashmir Media Service, 65 of the martyrs were killed in fake encounters or custody. The killings by the troops rendered 16 women widowed and 44 children orphaned. The troops molested 13 women and destroyed 67 residential houses and structures in the year.

487 persons were injured due to the use of brute force on protesters while 2,716 people including Hurriyat activists and prominent human rights defender Khurum Parvez were arrested during house raids and crackdown operations by Indian troops and police.

The report said that in the month of December 2021 alone, Indian troops martyred 31 Kashmiris.

It pointed out that since 5th August 2019, when Modi-led fascist Indian government revoked the special status of IIOJK, the troops martyred 515 Kashmiris.

It added that 95,948 Kashmiris have fallen to the Indian bullets in the occupied territory since January 1989 till date.

Meanwhile, Indian troops in their fresh act of state terrorism martyred one more Kashmiri youth during a cordon and search operation in Jumagund area of Kupwara district today.

The All Parties Hurriyat Conference leaders, Farida Bahenji and Yasmeen Raja, in a joint statement in Srinagar expressed serious concern over the surge in Indian state terrorism in the territory.

APHC leader, Bilal Ahmed Siddiqi, in his statement said the imposition of continuous curbs on the Friday prayers at Jamia Masjid in Srinagar reflects the communal and fascist mindset of the RSS-backed Modi regime.

Shutdown was observed in different parts of Srinagar, Sopore, Pampore and other areas of the territory today to protest against the Modi government’s nefarious designs to change the demography of the occupied territory.

Call for the shutdown was given by various pro-freedom organizations.