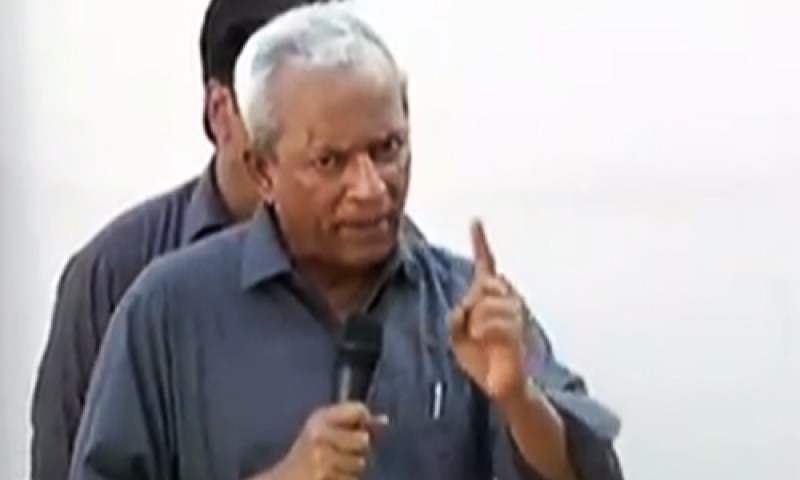 RAWALPINDI: PML-N leader Nehal Hashmi was transferred to a hospital on Friday after he complained of chest pain, one day after he was disqualified by the apex court in the contempt of court case.

According to details, the PML-N leader was transferred to Adiala Jail hospital after he complained of suffering from chest pain.

Jail authorities revealed that he was shifted to the hospital in the vicinity of Adiala Jail after his health deteriorated.

The development comes one day after the senator and PML-N leader was found guilty of contempt of court by the apex court in a case pertaining to his incendiary speech from May 31 in which he had issued threats indirectly to judges of the Supreme Court of Pakistan.

Nehal Hashmi has been sentenced to one month imprisonment and has been fined Rs 50,000. In case of failure to pay the fine, an additional one month of imprisonment will be added to his sentence.

Nehal Hashmi will be sent to Adiala Jail where he will serve his imprisonment sentence.

“Justice Nehal Hashmi has insulted the court,” remarked the bench.

The three-member bench headed by Justice Asif Saeed Khosa and comprising Justices Dost Mohammad and Maqbool Baqar gave the decision today in a 2-1 order. Justice Dost Mohammad refrained from commenting on the decision and stayed silent instead. He voted against the decision.

Nehal Hashmi had targeted ‘enemies’ of former Prime Minister Nawaz Sharif whose disqualification case was being heard by judges of the apex court back then.

“You are in service now but remember now–you will retire tomorrow,” he had thundered. “You will not be spared.”

Hashmi had tendered an unconditional apology for his remarks a couple of days ago. The apex court rejected his apology and announced the verdict.