India and US are coming closer to contain China in the region : Pak FA advisor
1 Sep, 2016 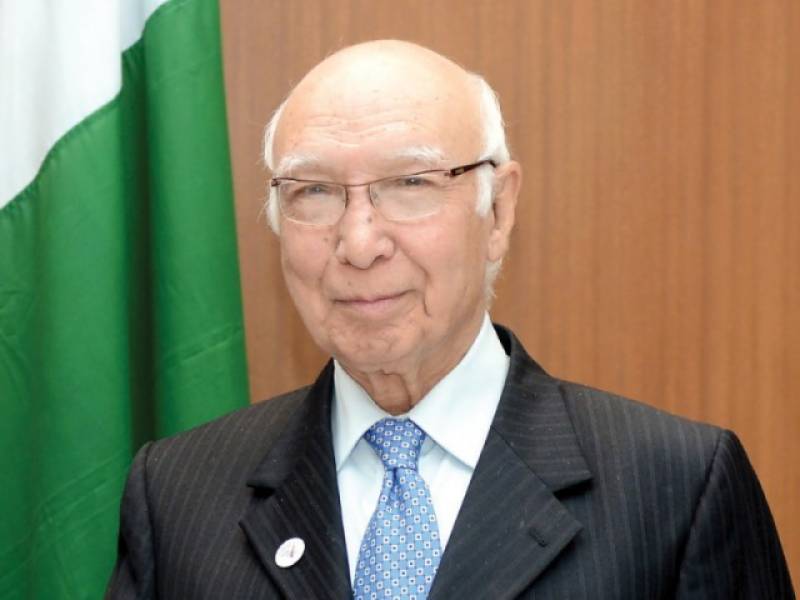 ISLAMABAD (APP): Advisor to the Prime Minister on Foreign Affairs Sartaj Aziz terming Pakistan's isolation as propaganda said it was enjoying good relationships with China, Russia and Middle East besides other significant countries of the world.

Pakistan stands at the right place at all international forums keeping in view the kind of alliances being formed in the world today, he said in an interview with BBC on Wednesay..

To a question, on the Kashmir issue, he said it must be resolved according to the aspirations of the Kashmiris as those who can shed their blood for a just cause willingly can't be subdued by any power.

He said as the withdrawal of foreign forces began from Afghanistan troubles started in the Middle East and a shift in the US foreign policy could be seen with its increased focus on Asia.

To a question, Sartaj Aziz said the United States is changing its policy in order to check increasing influence of China in the world; and as India fits more in that policy; therefore, Washington and New Delhi are coming closer.

He said Pakistan in the new situation has been getting closer to China, Russia and other members of Shinghai Cooperation Organization and is also maintaining its ties with US for being its ally for some four decades.

However,he said, Pakistan wants to have cordial relations with the United States side by side China and other countries.

To a question about US Secretary of State John Kerry's statements in New Delhi, he said if he had been in Pakistan, his statements would have been different.

He said the entire international community knew that no other country of the world could render many sacrifices which Pakistan did as far as terrorism is concerned, but India wants that Pakistan could not gain its credit in this regard.

He said menace of terrorism is gaining ground the world over except Pakistan which has eliminated terrorism from its tribal areas, prevented IS from gaining ground in Pakistan and started reforms in the tribal parts of the country.

He said soon the world community including US would know how credible Pakistan has been as far as anti terror campaign is concerned.

He dispelled the impression that Pakistan is being discredited with the statements of John Kerry and stressed that effective steps are being taken against all terrorist outfits including 'Haqqani Network' under National Action Plan of the Prime Minister and military campaign against terrorists titled 'Operation Zarb-i-Azb'.

He said Pakistan was disappointed to an extent that many countries including United States instead of condemning Indian atrocities against Kashmiris has just expressed minor concern in this regard.