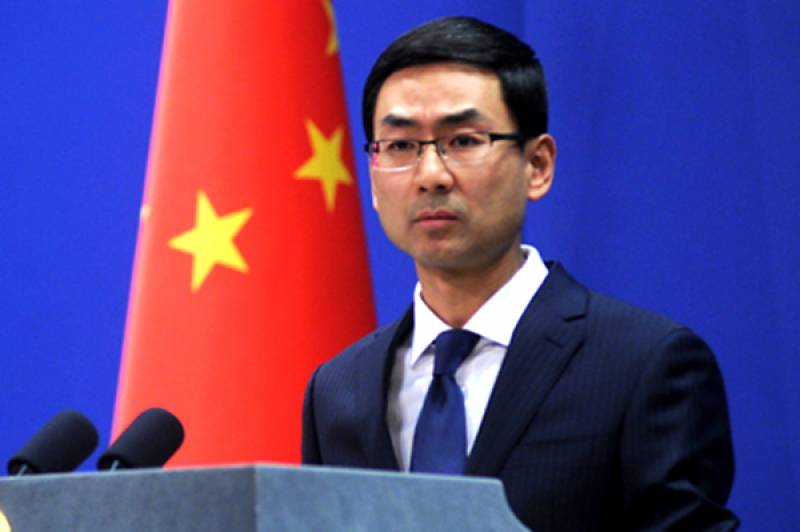 BEIJING - China on Friday reiterated its stance over “bifurcation” of Indian Occupied Jammu and Kashmir (IOJK) into two union territories and said it deplored and firmly opposed to the Indian move.

The spokesperson said that India was challenging China’s sovereign rights and interests by unilaterally revising domestic law and administrative division.

“This was illegal, null and void. It will neither change the fact that the relevant region is under China’s actual control nor produce any effect,” he added.

Geng Shuang urged India to respect China’s territorial sovereignty, abide by bilateral agreements and safeguard the peace and tranquillity in the border region with concrete actions to create conditions for a proper settlement of the border issue with China.

It may be mentioned that the Chinese foreign ministry’s spokesperson reiterated the stance of his government over “bifurcation” a day after the Indian ministry of external affairs spokesperson Raveesh Kumar claimed that reorganization of Occupied Jammu and Kashmir was entirely its internal affairs and it did not expect other countries to comment on such matters.

The Indian government on the night of October 30 announced a decision to divide the state of Jammu and Kashmir into two union territories – one Jammu and Kashmir, and the other Buddhist-dominated high altitude region of Ladakh. Both will be directly ruled by New Delhi.

Lin Minwang, a professor at Fudan University’s Center for South Asian Studies in Shanghai told the Global Times, a daily tabloid newspaper under the auspices of the Chinese Communist Party’s People’s Daily newspaper, focusing on international issues from a nationalistic perspective, that such a decision showed that India wants to add its military presence and control in the border regions and China’s stance and its actual control over the Aksai Chin region have never changed.

“Border frictions between the two could increase in the future,” Lin said. “Jammu and Kashmir” is a disputed territory with Pakistan, while “Ladakh” is disputed with China and includes Chinese territories in its administrative division.

The eastern end of the so-called “union territory of Ladakh” is made up of China’s Aksai Chin plains. China defeated India in a border military conflict in 1962 and successfully safeguarded Aksai Chin, which remains under Chinese control.

Although the two countries’ leaders met earlier this month and bilateral ties are developing, sovereignty disputes would not disappear immediately as India holds a tough and stubborn stance, Lin said.

Instability in the region will persist if India increases its activities and provokes China’s sovereignty again, Lin warned.