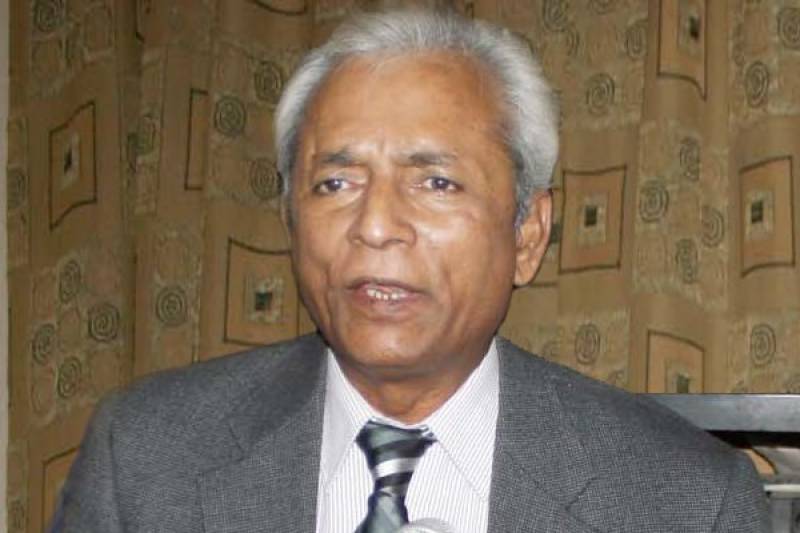 ISLAMABAD: The Supreme Court on Thursday announced its reserved verdict in a contempt case against Senator Nehal Hashmi.

Nehal Hashmi has been awarded one-month jail term and a fine of Rs50,000.

The former PML-N stalwart was taken into custody from courtroom by police officials soon after the announcement of verdict to shift him to jail.

With the court decision, Hashmi has also been disqualified for five years to hold a public office after his conviction in the case.

The court had reserved its verdict on January 24 after the former PML-N senator submitted an unconditional apology for his threatening remarks against those investigating former Prime Minister Nawaz Sharif and his family.

The video of threatening speech at an event in Karachi went viral on social media and eventually drew instant reaction from the Supreme Court on May 28, 2017 after Chief Justice of Pakistan (CJP) Mian Saqib Nisar took suo motu notice of the incident and summoned the former PML-N Karachi chapter leader to appear before the court.

At the last hearing on January 24, the three-judge bench censured Hashmi for the wordings of his apology submitted to the top court.

“I apologise! If the court deems my remarks as committing contempt,” he stated in his reply to the court.

To which, Justice Asif Saeed Khosa inquired about use of ‘if’ in his apology.

Hashmi’s counsel then made an unconditional apology on behalf of his client.

The bench ruled that all institutions should be respected particularly when working according to the constitution.

“The institutions should not be undermined,” Justice Dost Mohammad had then asserted.

The court then reserved its verdict in the case, which was announced earlier today.

Earlier, PML-N supremo Nawaz Sharif had issued orders for the expulsion of PML-N Senator Nehal Hashmi from the party over violation of the party discipline.

A five-member disciplinary committee in its report recommended the prime minister to take action against Hashmi. Raja Zafar ul Haq – head of the committee – found Hashmi violated the party’s code of conduct and reported the premier for action against him.

The committee report also concluded that Hashmi’s speech was reckless.

Acting on the committee’s recommendation, the prime minister expelled Hashmi from the party.

In the video, Hashmi was seen warning opponents and officials of state institutions’ of dire consequences over conducting an investigation in line with the Supreme Court’s Panamagate verdict.

“…Currently you are on service, but tomorrow you will retire and we will make your life miserable,” Hashmi was heard in a video addressing workers at a party event.